Compiled a list of all the subs for easier navigation. Didn't think it was necessary before, but in retrospection, I've probably done more things I had ever expected I would :) 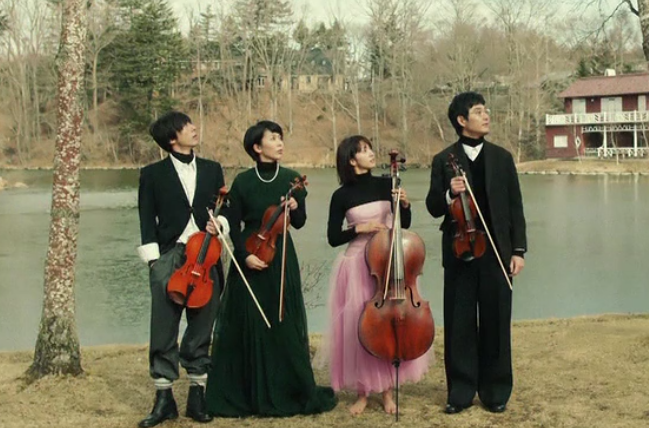 Has it actually been three years since I last worked on a subtitling project? Man, time really passed me by lol.

Anyway, I couldn't be more ecstatic that my new project is a drama coming from the writer of Soredemo, Ikite Yuku and Saikou no Rikon. I've been anticipating Quartet ever since it was announced last year. The amount of talent that this show has gathered is explosive. We have the two gorgeous and extremely talented Matsu Takako and Mitsushima Hikari playing our female leads, and two very capable male counterparts in Matsuda Ryuhei and Takahashi Issei. The first episode left me feeling pretty good about the show. It's been two and a half years since Sakamoto wrote something that I truly enjoyed (which was the one episode he wrote for Oyaji no Senaka), so fingers (and toes) crossed that Quartet lives up to all its potential!

The subs work with raws originally uploaded by furransu here. Timing was done by keiko1981 (Thank you!!).

These subs are strictly for personal use only. Please, do not reupload them anywhere else, especially streaming sites.

P/S: Is anyone else also watching Super Salaryman Saenai-shi? I'm all for Tsutsumi Shinichi playing a superhero who is in fact an ineffectual salaryman!

It's been forever since I last posted here. Man, I miss this place. There used to be so much activity here and I used to check all the Arashi pages almost every day (that was ages ago lol). Is it just me or LiveJournal has become really buggy and painfully slow?

Just wanted to check in to say that I have been doing great and I hope you all are doing well too. My birthday was this past weekend and I was pleasantly surprised to receive your lovely messages here (you know who you are, thank you!).

I am also so so glad that some of the links on this journal are still working and that some of you are finding my posts/subs helpful. I wish more links (especially hardsubs and Arashi-related videos) were working, but unfortunately I don't keep a lot of these older files anymore.

So guys, my question to you is: where is the next big Arashi/J-dramas community? I'm thinking of moving my journal and perhaps revamping it, and I would like to be somewhere close to you guys haha. Is everyone over at dreamwidth now? Honestly I have been so inactive I don't even know how to navigate communities anymore. Let me know your suggestions, guys!

Also, do we have any communities that focus on subbing? I know a few groups out there who are taking on some of the more popular titles, but I would really like to gather a small-ish group of folks who enjoy perhaps less-known and more mature movies and who would like to take on subbing projects with me.

Hey everyone, how have you been?

I have been meaning to do a post on my much neglected LJ, but I have been quite detached from subtitling for a while that there was nothing much to post. Instead, I have been spending my time enjoying old and recent Japanese movies and maybe one or, if I'm lucky, two dramas per season. After the first two seasons of 2014, it is suffice to say that this year is looking gloomy for the TV dramas with a number of highly anticipated productions failing to deliver. Hopes are raised for next season's Wakamonotachi 2014, which boasts an impressive group of talents. However, its writer Muto Shogo previously wrote both the thrilling Kazoku Game (based off the novel) and the underwhelming Atashinchi no Danshi (an original script). Wakamonotachi 2014 is a remake of the 1966 drama of the same name, so it looks like the plot will at least be decent. Together with such a capable cast, it is safe to hope that the drama will be watchable.

If you are a member of plotboxes, I have been posting my movie picks of 2013 there. Most of those I have watched so far, I have really liked. Top recommendations are Ore wa Mada Honki Dashitenai Dake (I'll Give it my All... Tomorrow) and Soshite Chichi ni Naru (Like Father, Like Son). I think both of these movies did an excellent job in portraying the intricacies of family ties, of daily obligations and anxieties, and of love. Ore Mada is definitely the more humorous of the two, but it is not without its moments of introspection. Soshite Chichi is representative of Koreeda Hirokazu's - delicate, absorbing, genuine - though definitely much less heavy than his previous works.

Another comedy that I have watched but did not quite live up to the hype is Shazai no Osama (The Apology King). It started out very entertaining, and there was some smart writing that Kudo Kankuro had to offer. However, it digressed halfway and turned into an unconvincing hodgepodge at the end. It is still worth a try though, if you are in for Abe Sadao's performance. It also doesn't hurt that Inoue Mao and Okada Masaki are both eye-candies. And Ono Machiko. And Takenouchi Yutaka.

If you are ready for something more emotionally taxing, I would recommend Sayonara Keikoku (The Ravine of Goodbye). Make sure that you are in the most cheerful of mood, because this stuff is dark. It is heavy. But is it also riveting. Sayonara takes you through the journey of two people struggling to love and forgive. It explores the dark side of human emotions and the irony of despair and happiness. Yoko Maki was stunning and gave perhaps one of the best performances in her career. If you liked Akunin (Villain) released in 2010, you will probably like this one as well. Not surprisingly, they were both penned by the same novelist Yoshida Shuichi. What is surprising, though, is that he also authored Yokomichi Yonosuke (A Story of Yonosuke), a charming comedy about a country boy meeting people and changing their lives in a big city. Not as excellent as the first two movies I mentioned, but definitely commendable.

So... there goes my rant. If you have watched any of these movies, I would love to hear your thoughts on them so we can chat :D. Anything else you enjoyed or look forward to?

P/S: If anyone saw my "Semi-friends only - selectively adding" post popping up in your friends page, that was automatically posted by LJ. I've since deleted the post to avoid any confusion.

Hi everyone! It feels like forever since I last worked on something! My friend and I both enjoyed this movie so much that we decided to subtitle it together. Highly, highly recommended if you're looking for something fun and light-hearted, yet still very touching.

Softsubs mega
If you're looking for the raw, I uploaded it here on

plotboxes. You'll need to be a member to access the post.
Thanks to furransu for providing the timing.

Strictly no hardsubbing, re-uploading and re-posting of these subs.
Please do not edit my subs and put your name in as if they were yours.
Please read this post if you're going to repost them anyway
If you're using these subs for any purpose, please let me know.

Hi everyone! I'm back subbing Nino's most recent movie. There are raw videos of the rental DVD floating around (If you can torrent, you can find the movie here), but let me know if you still need it. I'll probably try to upload the raw on plotboxes or something. Or better yet, if you could help uploading any raw you already have, it will be nice too. Just let me know in the comments!

Edit: Some people have pointed out a direct link for the BRRip raw here (you'll need to turn off ad-block).
Or get the file from the mega folder uploaded by

Strictly no hardsubbing, re-uploading and re-posting of these subs.
Please do not edit my subs and put your name in as if they were yours.
Please read this post if you're going to repost them anyway
If you're using these subs for any purpose, please let me know. 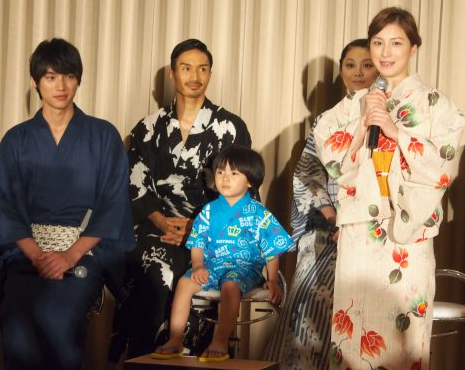 The cast of Starman ~ Kono Hoshi no Koi ~ souce: Oricon

Being a consistent fan of Jdramas is never easy. Sometimes (or most of the times actually) you have to plough through a bunch of utterly distasteful series just to find one or two gems that you dearly love. The previous drama season was easily the least distracting factor in my life, since it only afforded a number of disappointments and watchable dramas were few and far between. I hated myself for finishing the concoction of banality and egregious acting that was Last Cinderella just to find out the ending was exactly what I had anticipated, though to be fair, Sakura's antics and her banter with Rintaro were probably the drama's saving graces.

First episode for anyone who wants to try this drama out. I wasn't really planning on subbing this, but I wanted to get this out before raws of the second episode are around.

Strictly no hardsubbing, re-uploading and re-posting of these subs.
Please do not edit my subs and put your name in as if they were yours (MyAsianCinema etc).
Please read this post if you're going to repost them anyway
If you're using these subs for any purpose, please let me know. 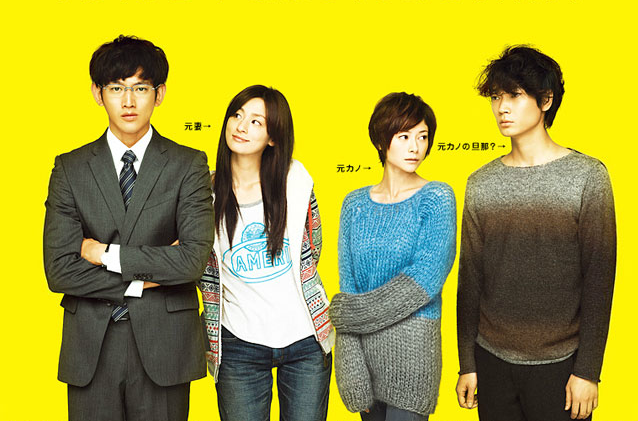 So the winter season has started and needless to say, Sakamoto Yuji's Saikou no Rikon tops my to-watch list with a very promising cast consisting of Eita, Ono Machiko and Maki Yoko.

After his delivering two excellent and emotionally charging dramas that were Mother and Soredemo, Ikite Yuku, I was especially interested in seeing what he will explore with this love comedy, having not seen any of his more comedic dramas before. With names like Eita and Maki Yoko, this doesn't seem like it will disappoint.